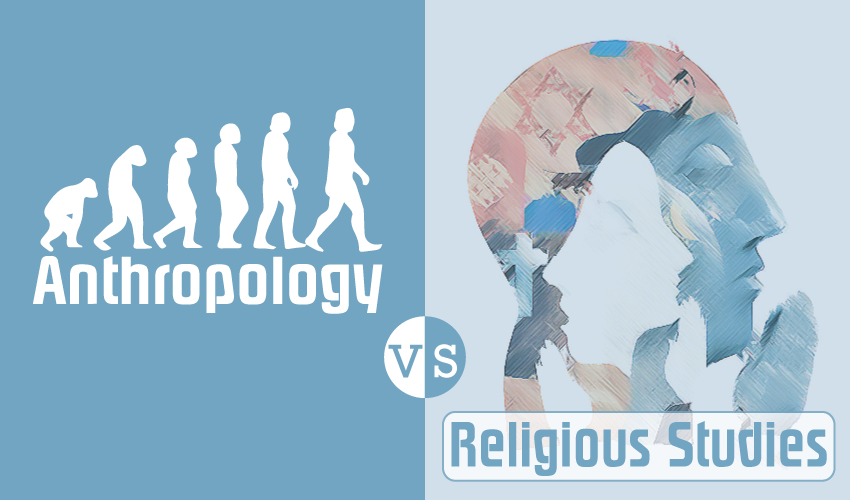 Anthropology studies about the past and present of human society and their behaviors. On the other hand, religious studies focus on the origins and detailed studies of various religions all over the world.

Humans are born with the instinct to explore. They spend their lives looking for the answers to their very existence. The study of humans, from their anatomy to their social, cultural and economical aspects of life, everything is dealt with a subject called Anthropology. It involves a deep understanding of evolution of mankind and study of their lifestyle, differences between cultures, behavioral patterns etc. Simply put, all that has to do with the humans is scrutinized in a detailed manner in the field of Anthropology. On the contrary, religious studies involve the in-depth learning of different religions in the world.

Objective- The element of Novelty in the study

The objective of religious studies is to raise awareness in humans regarding the purpose of life. That the aim of life is to please the creator and to choose the way of life as per His will. The study of religions doesn’t aim at exploring the unknown realities or acquiring the knowledge regarding different aspects of life. It is rather about interpreting the word of God. It is about accepting what is already given by Him. There are limits which nobody is permitted to transgress. Nobody can bring a better version of knowledge than the book of God. All in all, religious studies also involve comparison between the religions. On the other hand, anthropology is about exploring the hidden. There are no bounds to it. Anthropologists delve into all the fields related to human life to their extremes. In religious studies the source of science and knowledge are the holy books whereas Anthropologists dig into the works of scientists.

The element of morality

Connection with the creator

There are two approaches taken by the anthropologists. We can call them two separate schools of thought. First, the secular approach and second is the theological approach. The second approach involves the concept of creationism according to which humans are created by God. It involves the teachings of bible. However, the secular approach excludes the role of God in creation of mankind. Under this approach, scientific theories of evolution are believed to be the true identifiers of human evolution. Whereas, religious studies are not confined to Bible only, in fact all religions are respected along with their teachings. As per the study of religions, God is the creator of the universe and His evolution is not be known by humans. Whereas under anthropology there is nothing, that humans don’t deserve to know.

A branch of anthropology deals with religions as well. Since, anthropology is the study of all aspects of human life, so why would it exclude religion? However, anthropology of religion differs from religious studies because the former aims at taking religion merely as one of the subjects of study and exploration of human history and the latter revolves only around religions and the holy books for learning, understanding and preaching.

Difference between a First Language & a Second Language
Next:
IELTS vs TOEFL: Similarities and Differences

Difference Between Participle and Gerund