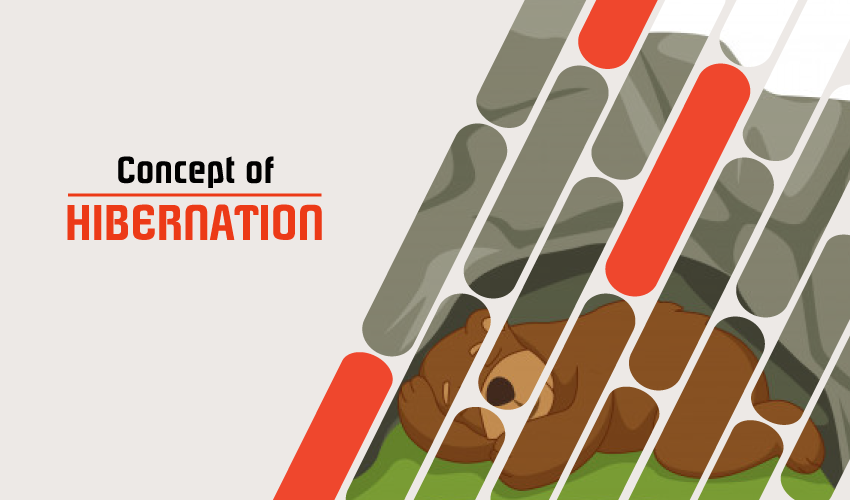 The practice of remaining inactive or sleeping, followed by certain animals during the winter is known as hibernation.

If we could sleep throughout the winter, nonstop, we would have escaped the unbearable cold for sure but had woken up with electricity, gas and telephone disconnected or perhaps we would’ve found ourselves thrown out on the road because of the unpaid rentals. So maybe the idea to hibernate wasn’t a good one for humans that’s why we can’t do it.

Hibernation is a process that occurs in many species like polar bears, ground squirrels, snakes, bats, frogs, lizards etc. The body of the hibernating species goes to a long sleep because of the unbearable cold that it cannot survive otherwise. The hibernating animals or birds undergo a number of bodily changes. They breathe extremely slow. Besides, the body temperature lowers according to the surrounding temperature. Their metabolism is lowered and they become inactive throughout the hibernation period. They often hide in the burrows and caves to remain out of sight so that nobody disturbs them in their peaceful sleep and mainly so that they’re not hunted.

Why else do animals hibernate?

Another fact about hibernation mostly not known to people is that the species also tend to hibernate when there’s a dearth of food and water. So, cold is not the only reason for hibernating but their metabolic rate slows down so that they can escape the period when they can’t hunt on their prey or find food and water.

The process of hibernation can be classified into 2 main types:

It’s a type of hibernation which doesn’t last for the long periods of winters. Some mammals including birds require a lot of food to keep going. They constantly eat because of their faster metabolism. In winters, there’s a scarcity of food and they hibernate at night so that they can survive without food for the night at least. This short term hibernation is known as daily torpor.

Ground squirrels and polar bears lower their body temperatures in winters for a long period of time. They are capable of going low to the verge of freezing which keeps them alive during hibernation. However, they periodically keep warming up for changing positions that helps them in their comfortable sleep. This period can extend to months and is known as seasonal torpor. A big bear can hibernate for a period of 100 days. And of course, during this period it wouldn’t eat anything. So how do animals survive without eating during the hibernation period? They actually gain lots of weight and prepare their bodies in advance. A bear gains up to 30 pounds a week before it is all set for hibernation. The extra fat is stored in its body which it uses up while it’s asleep.

Some animals do wake up in intervals while they’re hibernating, for example for pooping or for looking for food when they feel they can find it somewhere around. However, other animals go in such deep slumber that nobody can wake them up and they actually look dead. They wake up only when the surrounding temperature increases and their brain gets the signal that it’s time to stop hibernating and finally wakeup.

Basics of Strategic Management
Next:
Basics of Credit Card and Debit Card